How to Kiss a Hippo

Fact: Hippos reportedly have killed more humans than any other land mammal.

Fact: I fed and kissed a hippo in the wild of South Africa.

And when you look into their mouths with gigantic teeth poking out, no sane person would want to come near that if it’s angry.

To me, they’re just the cutest blubbery animals I’ve ever seen. They’ve been top of my favorite animal list for a while, though no one understands why. But oh my goodness – I came across the most amazing opportunity on my trip to South Africa. I met the world’s most interesting hippo! She lives in the wild, but she thinks a human couple is its parents. So she hangs with her fellow wild hippos each day and then goes home to her home sweet home, where she’s fed tasty meals by hand, fed refreshing iced rooibus tea, and given a nightly full body massage with ylang ylang and lavendar oils.

Oh yes, this hippo has it made. And in return, her friendliness toward strangers is truly a delight. 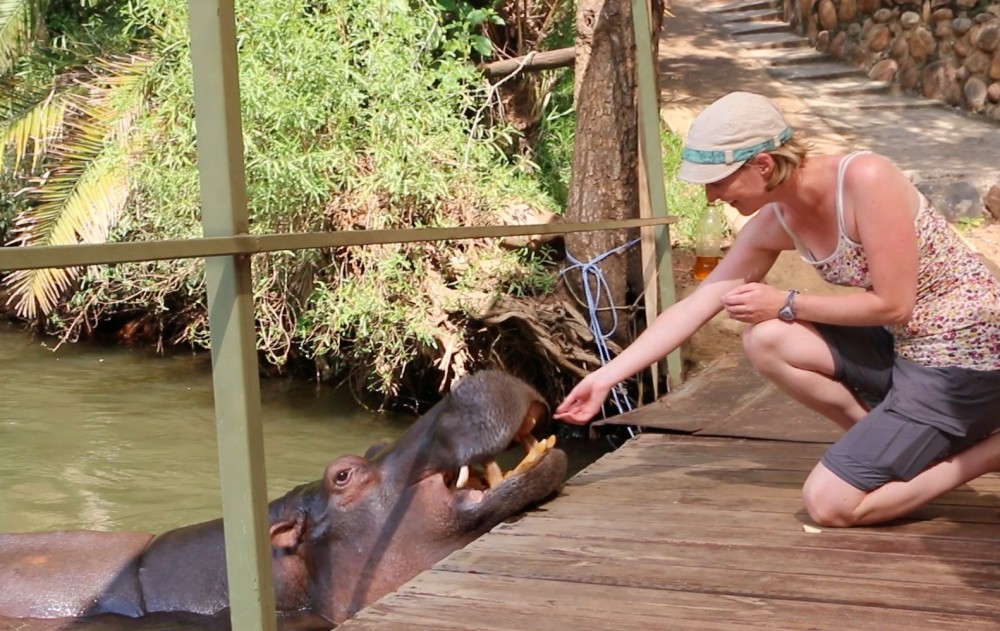 You see, this is Jessica the Hippo, and I fell in awe of her five years ago when I discovered a news report on her on Youtube. Jessica is a famously friendly hippo who became human friendly when she was rescued during a flood as a newborn. Now, she’s a big, blossomed ten-year-old that you can visit weekly.

Meeting her was one of my big dreams I hadn’t even established on my bucket list. Seeing hippos in the wild was a goal, but knowing their temper, I just planned to see one from a safe distance and be content with that.

But after looking through a guide book and discovering I could drive to her within a day’s notice, it was on. I was set. Oh, the excitement!

We took a long, bumpy dirt road down to her home in Mpumalanga, just west of Kruger National Park. From there, we got to feed her a bucket full of sliced potatoes by hand, then give her a bottle full of tea. After that, all the ladies were invited to bend down and give her a big smooch. The feeling: cool, moist and bristly (but much softer than kissing stubble).

After that, we watched as Jessica jumped onto the dock to show us her full figure. She’s one smiley big gal and a whole lotta hippo!

I know most people don’t share my infatuation with hippos. But even if you just find them a little intriguing, you’ll love this gal, too!

What This Means for You

Where are you finding yourself limited in beliefs? Not are you limited on if you’ll ever have the possibility to kiss a hippo… but rather, limited on bigger things in your life.

Where are you limiting your dreams of your career passions? Your family wishes? Your friendships? Your travels? Your hobbies? Your precious time?

Where are you limiting your idea of money in your life?

What are the possibilities that open up when you get curious?

Think about this. There’s so many ways you could be proven wrong and shown that the possibilities in this world are so much bigger and broader than you could ever imagine.

Now back to the hippos…

Watch my video of our bonding moment, and also watch the video of her background and extraordinary lifestyle. Oh, and her human “parents”? They’re awesome in person. Lovely, caring, hippo-loving people.

One last comment: If you’re wondering about her hippo to human social life, apparently she’s found herself a boyfriend so she may just be a mama in the near future. We’ll wait and see!

And one final, final comment: I have reason to believe that the stat for human-killing hippos is inaccurate. Sure, they’re a culprit at times as they’re very territorial with bad tempers. But they may just be a scapegoat for unsolved disappearances as well… Just saying.

New Year, Same (Super!) You
Do You See What You Think You See?