While on safari in Kruger National Park a few months ago, Colin, my hubs, and I were on a tight deadline to drive out of the park, return our car rental and catch a flight.

Easy enough. But we had to factor in four main challenges:

That meant that all told, we were left with very little time to spare. Time we knew would easily be used up in this wild park. We just had to get on our way and hope enough luck to beat the clock.

So….naturally….we had a TON of events slow us down!

First, and most amazing, was that just outside the park gates, as the sun was rising, we caught one of the sightings we’d been hoping for all week – a lion! One of the boast-worthy sightings that we just hadn’t managed to catch yet.

Being that this was a big thing for us, we just had to stop and ogle for a while. After all, this was a king of his turf who was simply waiting to pose for us along the side of the road. And with the shimmer of the sun rising upon his mane…it was simply amazing.

We then zigzagged past all the other onlooking cars who stopped when we stopped to take a peak themselves, and got back on the road.

Next, we came to another traffic jam, as you do when there are so many creatures to stop and look at. This time, it was a duo of hyenas – another animal spotting we hadn’t seen! The second hyena was holding something in his mouth that seemed to please him. Turned out to be a turtle.

In this case, the furry things didn’t stick around, so dodging the parked cars in the road wasn’t as difficult.

Next, there was a male elephant. Easy enough, we had passed so many elephants grazing on the side of the road it’d be no problem.

But something was different—

This bull was clearly not feeling the morning cheer. When we approached, he showed us all the signs of an angry, angry elephant. Blew up dirt with his trunk, swayed his head, lots of things that gave us the very blatant “hint.”

So we took the natural reaction and stopped the car. Then backed up to give him some space, but it was too late – this guy was miffed at us and wanted to make that point clear.

He stepped forward in the road. Then he stepped more, keeping a very steady pace. As he walked forward, Colin maneuvered his reverse. Both of us had flashes of those safari pics where an elephant is rolling a car.

“Easy does it, Ellie,”  I tried to say through my elephant telepathic skills (okay…skills which I clearly don’t have but they would’ve come in handy!). He didn’t listen, of course. 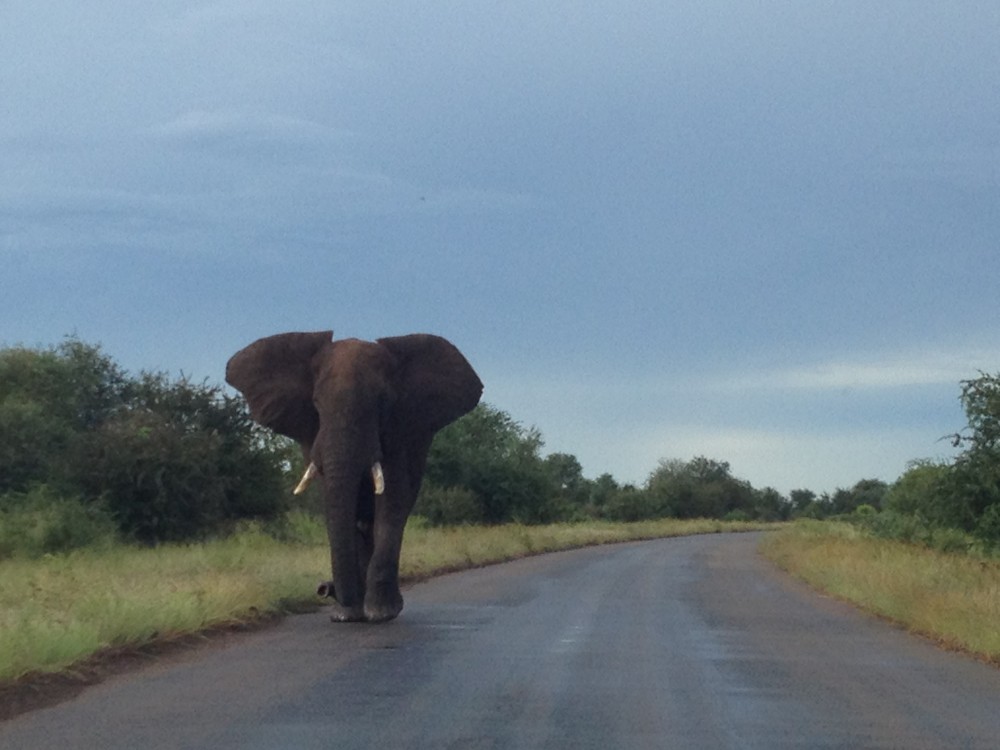 So he kept walking toward us, we kept reversing, and then some cars, not noticing this bull was angry, stopped and blocked the road behind us, excited at their find of an elephant in the road.

“Argh,” Colin gasped as he was in the full “don’t crush my car” mode. As you do.

Luckily, the spectating car blocking both lanes of the road pulled forward so we could weave through and continue reversing.

And only then, when we reversed past the newly stopped cars did this elephant lose interest. He stopped, then averted course and crossed into the grasslands and out of sight.

Next up, road issues. We had the option of three park exits. But the one we chose proved a bad idea, as the stretch of road closest to the exit was closed due to flooding. 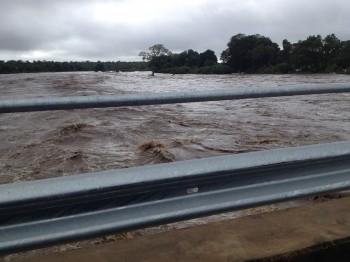 A bridge was out, and no signs mentioned this until we were nearly there.

Great. Next option? Quite a bit of detour, but after consulting with some safari drivers along the road, we got the okay that roads up north were clear. So we had to backtrack, weave past other stopped cars of animal spectators, pass a few bridges, and finally make it out.

Thus, lots of treacherous potholes. Lots of weaving, lots of close calls with popped tires.This was all going away from where we really wanted to be, which was south. As we got out of the more northerly exit, the new issue popped up. This was the Mpumalunga region, where no roads have been funded in ages.

We hustled down, stopping only in the zones we already knew were patrolled by cops looking for speedsters. Then, we made it to Hoedspruit, returned the car with some hassle, but not enough to care. And then, to our flight! With a spare moment for a snack before.

Moral of the story: When traveling, always factor in spare time for elephant tempers.

And, stop for lions! It’s worth it for photos like this.

Don’t Put Up With the Undertow
Stop the world, I wanna get on!