Here's why it's fun to sit in the middle seat on the flight.

What’s this? It’s a photo of a photo. I took it to illustrate the joys of flying in the middle seat.

(See details below…it’s a gift from my seat mate) 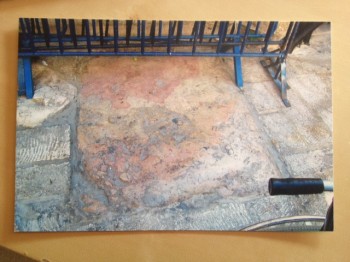 That’s right. That seat most people dread and do whatever they can to switch to window or aisle…I happen to enjoy, for the most part.

It can be delightful. I have a theory that somehow when I fly solo, somehow it just inspires people to talk to me. And when it’s in the middle seat, I get so much more variety.

The most recent middle seat journey I had, the moment I sat down, the woman to my right started talking to me just after takeoff. She didn’t look at me much, she hid behind her grandiose Tina Turner locks. But she was all about sharing tales of her recent visit to Jerusalem. An avid Christian, she joined a tour that took her to all the sites where Jesus spent his last days. First, she told me she was baptized in the River Jordan, then she went on to describe the awe of that experience, and also the tiny fish that liked to nibble on legs (something you wouldn’t really think about until you experience it).

Then she mentioned visiting the spots where Jesus’ fell while carrying the cross. She dug her hand into her bag and pulled out a packet of printed photos. She handed me this photo above so that I could have a copy of where Jesus fell for the third time on his walk to crucifixion.

Wow, i thought. First of all, can they really pinpoint where that was? Gotta admit I sometimes get skeptical of those touristy claims, but I also think it’s really cool. What a major part of history, regardless of your religion. And how cool and sweet of her to share a photo. Isn’t it just great sharing travel stories with others?

Another cool thing about my chatty new travel friend: she introduced herself early on in the conversation. I’ve flown many places and struck up conversations with many people, and I have to admit: This is very uncommon.

I get a kick out of chatting with people next to me on flights because 9 times out of 10, you can have a good conversation with them, but no one ever gets to name introductions. I often don’t, because I consider it my sociological experiment to see who actually does. Sometimes it’s an end of flight name greeting before scurrying off the plane. Other times, it never comes up, sometimes it’s toward the end of the flight, most likely if there’s a solid common interest involved in the conversation. But this woman — the first in a long time, gave me a formal introduction early on (her name was Deborah, by the way).

This reversal of normal introductions seems pretty natural if you look at it in a scientific kind of way. We in our normal social structure don’t commonly sit in between two people we don’t know. Especially people that may have nothing in common except. Other social activities where this comes about is in crowded short-term public transportation (which non-city dwellers hardly do), sports stadiums or movie and live theaters (where you’re busy watching the main attraction), or possibly somewhere like a doctors office (where there’s not a lot of time to chat with others, as you’re soon called in for an appointment).

Each of these situations is based on the size of the crowd. If there’s any option to sit further away, or maybe even to stand, it’s pretty common that’s what we do. Like if you’re on a semi-empty bus, you wouldn’t sit right next to a stranger. Likely, you would sit in a space away from others.

Point is, there’s nothing like the long-term flight for sitting by someone who could be very different to you — or could have a ton in common. Aside from the commonality of traveling in the same direction, it’s a box of chocolates. And you have the chance to discover either element just by striking up a conversation.

Next, I chatted with the guy sitting to my left. He was on a very unique trip. He was moving to a new job in a new city. The biggest move he’d made in decades. It was really cool to hear about his new ambitions and new start. Our conversation sprung to life a new connection to introduce to my friend who is moving to the same place as him next month (San Francisco if you’re curious, where MANY people I know migrate), so that’s a fun thing in common that’ll be useful to both of them. He also told me about a mediation program he attended that I wasn’t familiar with. I’m very into meditation so it was great to hear his insight on the event structure and his success with it.

Oh, and the point of all this? Embrace the next time you get stuck in a middle seat. You never know who you’ll sit next to!

P.S. Are you the type to chat with people next to you on a flight? If so, what was one of your favorite conversations? Please add to the comments below. Grazie!

Have you heard about our Maine trip?
Lazy Day Pampering